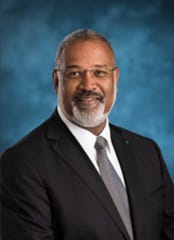 DETROIT — The University of Michigan has reached a $9.25 million settlement with eight women who were sexually harassed by Martin Philbert, the former provost and chief academic officer at the school, the school and the women’s lawyers confirmed.

The names of the eight women were not released. The settlement did not include Philbert himself. The women could still file a lawsuit against him.

Philbert, the second-highest administrator at the University of Michigan, had a lengthy history of sexually harassing female employees and had sexual relationships, including in university offices — while being promoted time and time again, an independent investigation released this summer found.

“Over the course of his employment by the University — while he was an assistant professor, an associate dean, Dean of SPH (School of Public Health), and Provost — Philbert sexually harassed multiple members of the university community, including both graduate students who worked in his research lab and university employees. Some allegations and other information about Philbert’s conduct reached university officials; others never came to their attention,” the report by the law firm WilmerHale said.

Sarah Prescott, the women’s attorney, said this was an important step for the university.

“Martin Philbert is a classic harasser — he was prolific and abusive, and he had the power and connections to protect himself for years. But this case I think illustrates that there is no one too high or too powerful to be held accountable,” she said. “[My clients] brought about policy changes they are proud of, and this settlement number speaks for itself.”

“There is a path even after this agreement for pursuing Philbert individually — this deal does not release him, and that is very unique and I will say admirable on the part of the University. It is paying for its part in this, and leaving him to shoulder what he did individually. Most employers don’t do that.”

Philbert sexually harassed women during his entire career at the university, the WilmerHale report found.

“Among other sexual comments, he told three different women that he wanted to see below their tan lines; told one woman that he was ‘aching’ for her, and that they could have ‘beautiful coffee-colored babies’ together, and told another woman that ‘if I wasn’t married, I would really go after you.’ Philbert was persistent at times, texting at least one woman frequently, inviting her to travel with him, and arriving at work early apparently because she did.”

“Philbert also continued to engage in multiple sexual relationships with university employees. For nearly his entire tenure as provost, he was in simultaneous sexual relationships with at least two university employees, sometimes more. He pressed some of these women to send him explicit photos, which he stored on his university-owned devices. And he engaged in sexual contact with them in university offices, including with one woman on a near-daily basis for a time. These relationships took a toll on the environment in the Provost’s Office and created uncomfortable dynamics among some staff.”

Trump: 19 women have accused Trump of sexual misconduct. Here’s what their stories have in common.

Philbert had been at U-M since 1995 and was known as a talented, charming, empathetic researcher and administrator. He also was known for making inappropriate comments, said multiple sources who either work with him or used to work with him.

He was fired from his position as provost in March. In June, he relinquished his faculty tenure rights and his last day at the university was June 30.

He is the highest-ranking administrator at U-M to be accused of sexual misconduct. U-M, like other higher education campuses, is in the midst of ongoing controversy and debate over how it handles sexual misconduct allegations. U-M is also the center of a landmark court ruling that changed the way allegations by students are handled across the Midwest.

“The sexual misconduct of the former university provost that has been detailed in a report from the WilmerHale law firm is abhorrent and unacceptable,” U-M spokesman Rick Fitzgerald said. “The University of Michigan failed on many levels, as this individual advanced through the administrative ranks.

“We recognize how difficult it was for these eight women to come forward to share their experiences. We thank them for their courage and we apologize to each one of them and to all survivors.”