Members of the mayor’s office visit Voices, a youth center in Indianapolis, during a day of events highlighting existing violence prevention measures.

On the wall at VOICES, a youth-serving nonprofit on Indianapolis’ southeast side, hangs a poem.

Written by a former pupil and titled “If You Were to Walk in My Shoes,” it illustrates some of the things young people growing up in the city have been exposed to. Friends turning on each other. People trying to take advantage of your money. Pain. Death.

You would see kids with dreams fall victim to the wrong place, wrong time.

You will have to make life choices that really matter.

People will look at you like you are wrong.

You will be told you won’t ever be anything.

You will have to worry about dying every day you leave the house. 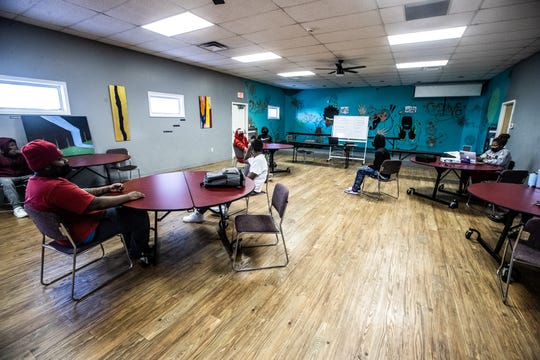 Trey and Kia Wright have operated VOICES for a decade and have been offering day-reporting services for young men 17 and under who are involved in the criminal justice system for four years. VOICES connects with these young men using art therapy integration, education and community service opportunities to serve the organization’s four pillars: empowering young men who are healed, creative, educated and disciplined.

“It was grounded in giving them an outlet to be able to advocate for themselves, express some of the trauma that they have gone through,” Kia said, “and it’s just really grown from there.”

Join us in giving: Support Season for Sharing today

With a staff of fewer than 15, VOICES serves nearly 400 youth each year through day reporting, after-school programming, tutoring and mentoring.

A few months ago, Davonte Hill became involved with the VOICES day-reporting program due to what he characterized as some “wrong actions” he’d taken that changed the course of his life.

“I needed a program that could help me move towards better goals towards my life,” he said.

Hill, 16, said he likes the camaraderie he’s found with the other young men in the program, but perhaps more than that, he appreciates the kindness of the personalities around him. The adults are there to keep you in line and make sure your schoolwork is being done, but they’re also there to give you opportunities and support.

Already, Hill said he has two job interviews lined up and plans to start working toward his GED when he turns 17 early next year.

On a recent Wednesday, Hill and the other young men in his program finished their schoolwork and delivered meals to those experiencing homelessness near Downtown.

Hill said one of his biggest takeaways from the program are personal accountability and integrity.