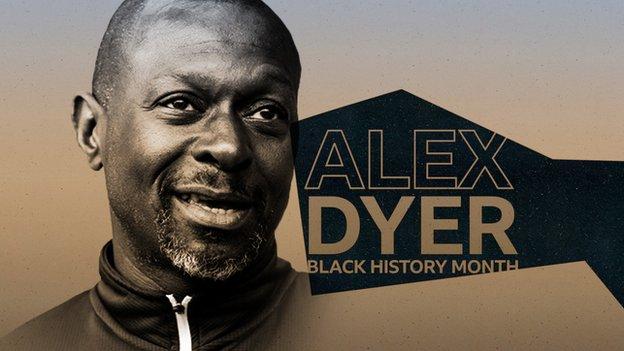 Throughout his life, Alex Dyer has been many things to many people.

A team-mate at various clubs, an apprentice painter at Blackpool’s old Bloomfield Road ground, sir to the kids he taught at a special needs school, best man to Chris Powell, and even an unofficial adopted son to Sheila and Colin from Hull, who cooked his dinners, did his washing and recorded Eastenders for him on their VHS machine.

Now, they just call him gaffer.

Here to celebrate Black History Month, the Kilmarnock manager talks to BBC Scotland about his route to Rugby Park, the special bond between him and Scotland manager Steve Clarke, and his hopes for the future as the focus in football falls on tackling racism.

Dyer’s rise to prominence, at least in Scotland, came in 2017 when he arrived in Ayrshire as assistant to Clarke, a colleague and friend for well over a decade. Yet to attribute his success to the Scotland boss is doing a disservice to the credentials of the 54-year-old Londoner. Make no mistake, Dyer’s path was built on firm foundations of hard work and respect.

“I was born in the east end of London, in a place called Forest Gate right near West Ham,” he told the Chris Iwelumo Meets podcast. “It was rough at times obviously as we were in the borough of Newham, which they always say is one of the poorest in the land, but we didn’t see it that way. Everyone was the same, they all worked and played hard.”

Snapped up as a kid for Watford, his move north to Blackpool in 1983 would set Dyer on a playing career that would span a dozen clubs and 18 years. He talks of cleaning boots and painting the stadium between training sessions during four years in the seaside town, and before at the age of 22, Hull City came calling for the young defender.

“People treated me well,” said Dyer. “I had a neighbour when I was at Hull City, Sheila and Colin. It was the first house I’d bought and every time I went out I left her with a key. When I came home she’d done my washing, she’d done the works. Two old people who had worked hard all their lives but never had any kids.

“They’d wait for me to come home from an away game at the middle of the week. I’d get in around 12 or one o’clock and I’d have food waiting for me. They’d bring me in. She knew I loved Eastenders and Coronation Street so she’d tape them on the VHS.”

After he called time on his playing career – which took him to clubs including Crystal Palace, Charlton and Notts County under Sam Allardyce – a calling to get back into the game came in the form of, well, a call, for Dyer.

While working as a teacher at a school in London, Alan