As channel blackouts for AT&T U-Verse and DirecTV subscribers continue, Dallasites may have to look to alternative sources for their weekly dose of college football and hit shows like The Bachelorette.

That’s because Tegna, owner of Dallas ABC-affiliate station WFAA, has yet to come to an agreement with AT&T-owned TV providers DirecTV and AT&T U-Verse.

It means subscribers could miss out on college football games carried by ABC this weekend, including Ohio State-Michigan State, Indiana-Wisconsin and Clemson-Virginia Tech. The following weekend, ABC will carry the Big 12 Championship game as well as the ACC Championship game.

“We are working on and remain committed to reaching fair deals with DirecTV and AT&T U-verse. Our track record proves it,” Tegna spokeswoman Anne Bentley said in a statement Thursday.

“Over the past few years, we reached hundreds of multiyear deals with cable and satellite companies all across the country,” Bentley said. “The reason we have successfully negotiated so many deals with so many partners is because we seek fair, market-based deals. It has been disappointing that DirecTV and AT&T U-verse, so far, have refused to reach an agreement.” 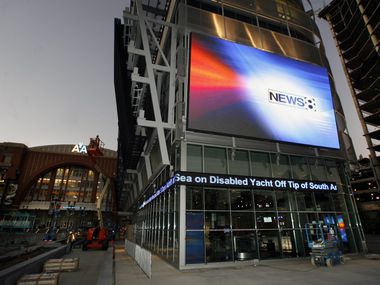 Dozens of Texas TV stations owned by media companies Tegna and Irving-based Nexstar could be inaccessible for satellite TV customers for the foreseeable future if the owners can’t agree with TV providers over what the companies are able to charge to carry the broadcast channels.

The longest recent blackout that kept channels dark for Texas TV subscribers was last year when AT&T and CBS failed to reach an agreement for 20 days. The stalemate was resolved just in time for the start of the NFL season.

If companies don’t come to agreement by the time you’re trying to tune into the big game or your favorite show, viewers still have options.

First, stations like WFAA in Dallas are free over the air if you have a working TV antenna that can pick up the station’s signal.

Locast is a not-for-profit live TV broadcast service available in major metro areas like Dallas and carries all the local TV affiliates, including Fox, NBC, ABC and CBS. The service is free to use and requires you to register an account online. It can be downloaded on various platforms, including Roku, Apple’s App Store and Apple TV, Google Play Store, TiVo, Amazon, DirecTV and U-Verse, according to its website.

AT&T was directing WFAA viewers to Locast in light of the channel blackout this week.

ABC offers a dedicated app to stream its shows, but it requires you to log in with your TV provider, meaning it may not be a viable option for DirecTV and AT&T U-Verse subscribers unless you’re willing to switch providers.

ESPN’s app will carry college football games this weekend, including ABC sports programming. Its app also requires logging in to your TV provider.