University City, MO — It should still be possible to take your family on the hunt for the perfect Christmas tree this holiday season — and most importantly, to do it safely, even as the coronavirus pandemic continues to worsen across the region.

At least 25 million real Christmas trees are purchased each year across America, and currently, 350 million are growing in all 50 U.S. states. And during this unprecedented year, Christmas tree lots and choose-and-cut farms nationwide are taking precautions as coronavirus cases rise to ensure patrons can select a tree with minimal health and safety risk.

In fact, the National Christmas Tree Association has developed a 2020 guide including recommendations and best practices for Christmas tree sellers to follow. The guide advises sellers to frequently sanitize items such as hand saws and tree cart handles, as well as countertops, restrooms and other areas.

“It is likely that Christmas will have a greater significance for many in 2020 as we seek to offset the disruption of normalcy from COVID-19 with a family-oriented holiday experience,” the association said in its guide. “However, shopping for a Christmas tree, the iconic centerpiece of the holiday, will be a different experience this year as the risks from COVID-19 must be taken seriously.”

If a real Christmas tree is on your wish list this year, see our selection of quality local farms within driving distance of University City.

Want to get the most out of your real Christmas tree? It can take some patience, practice and good advice. Here are a few things to know, from the National Christmas Tree Association:

Students are facing a nightmare before and after Christmas this year with ministers planning to force them into two periods of self-isolation this winter, according to reports.

In a rushed bid to prevent the spread of coronavirus from university cities to more rural areas, ministers are said to be drawing up plans to order students to isolate in their halls of residence before leaving for the winter break.

They will then be ordered to carry out a second period of isolation before they return to their universities, according to The Times.

Ministers are in a race against time to prepare the plans, with some universities breaking for Christmas as early as December 7, and are said to be working with vice-chancellors in order to give them enough time to prepare.

It comes as the latest figures show 310 Covid-19 victims were recorded in the UK last night and 367 the day before, in the highest daily toll since the end of May.

There were also 26,688 infections reported yesterday – the first week-on-week fall in a month.

It also comes as two universities, Durham and De Montfort in Leicester, have reportedly began trials to test asymptomatic Britons, with the Department of Health and Social Care. 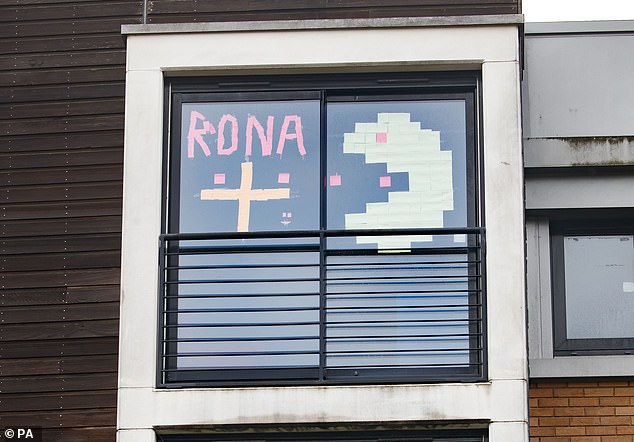 Ministers are said to be drawing up plans to order students to isolate in their halls of residence before leaving for the winter break. Pictured: Students put up signs in their window during isolation earlier this year 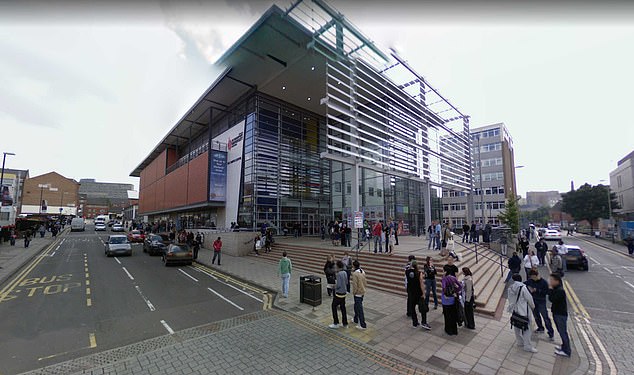 It also comes as two universities, Durham and De Montfort in Leicester (pictured), have reportedly began trials to test asymptomatic Britons, with the Department of Health and Social Care 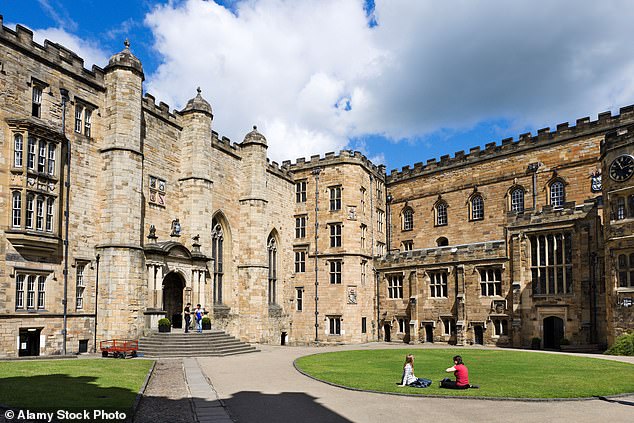 The trials will help uncover those with the virus, who are not displaying symptoms – who can quickly spread the virus

Scientists increased pressure for a tougher national lockdown last night amid suggestions that up to 85,000 could die in a second wave of coronavirus.

The study warned the country was at a ‘critical stage’ in the second wave and urgent action was needed to get the R number below one.

Boris Johnson is under growing pressure from scientists for a national ‘circuit breaker’ lockdown or a return to the kind of restrictions the country faced in spring.

The newly-revealed document claims that late February next year would see deaths peak at around 800 a day, with the potential for 25,000 in hospital at the worst part of the peak and as many as 5,000 in intensive care in England by March, The Spectator reported.

It emerged yesterday that ministers were given an analysis by Sage suggesting the second wave could be deadlier than the first, with many in the group of scientists believing the Government needs to take drastic action now.

Getting university students home for the Christmas holidays has become a political priority – and the plans to make it possible are getting more complicated by the day.

There are proposals for a mass testing programme for students and for stopping any in-person teaching for the last two weeks of term.

And there are arguments over whether students could be made to stay isolated inside their term-time accommodation during this two-week buffer zone, without any seasonal socialising allowed to avoid re-infection.

But the bigger issue – the next iceberg – is whether students should come back in January or whether they will have to stay home and study online.

If there are elaborate safety plans to get more than 1.5 million students home just before Christmas, is it really a good idea to try to reverse the process a few weeks later?

According to the Unicovid website, which tracks coronavirus in higher education, 114 universities have had cases so far this term, with tens of thousands of students and staff having to self-isolate.

And so options are under discussion about whether next term should be fully online – or maybe for the initial weeks – or for delayed or staggered starts, rather than risking triggering a fresh wave of campus outbreaks.

Otherwise it will mean huge numbers of young people moving from high tier infection areas to low, or from low infection areas to high, with the SAGE advice about higher education warning of “peak health impacts” at Christmas and New Year.

“A critical risk is a large number of infected students seeding outbreaks across the UK,” said guidance from SAGE scientific advisers last month.

Students could “amplify” the spread of coronavirus, said the SAGE advice, and movement around the Christmas holidays posed “a significant risk to both extended families and local communities”.

Unlike the autumn term – when university starting dates in the UK are spread across about a month – the January return is much more concentrated.

And it leaves the universities and the government with a decision about whether to press ahead with bringing students home and then straight back again, including across areas where travel is being discouraged – or finding a different way of starting the new term.

The standing advice from SAGE remains that as much university teaching as possible should be online.