In a time when individual expression is being touted as a way to help students deal with their topsy-turvy pandemic experiences, one main remedy — music education — is being quieted.

Enhanced precautions to prevent the spread of COVID-19 limit a group’s ability to perform together, encourage some to play outside even in the cold, and require coverings over musicians’ faces and instruments.

Music educators, creative by nature, have bent over backwards to reinvent music education that both complies with health and safety protocols and meets the needs of students who crave a creative outlet.

While a lot of attention has been paid to how to safely reinstate school sports, music educators feel left behind with minimal and outdated state guidance.

Choir singing as a solo activity

Billy Ray Poli left his opera singing contract to teach students “how music can be there for you no matter what.” Six years into steering the music department at Burlington High School, that sentiment is more important than ever. The choral director and his students had to bounce back first when enhanced safety measures due to COVID-19 threatened the continuation of choir classes this year and then PCBs kicked the students out of the school building altogether.

“It literally pains me I can’t be there for them,” Poli said. This sentiment he expressed in song shortly before the year began and the video landed on Good Morning America.

Even if he had a rehearsal space, right now Vermont does not permit choirs to sing indoors more than 30 minutes (the duration of Poli’s classes are 80 minutes) due to the nature of singing spreads respiratory droplets through the air. Still, Poli has found ways to connect with singers remotely and through socially distant pop-up concerts.

For group rehearsals, Poli sings all the voice parts while playing the electric piano in his kitchen, in “all of a four by six inch box on their screen,” he said. The musicians sing their part, all on mute, preventing a cacophony of internet delayed voices.

“There’s a reason why online choir is not a thing,” Poli said.

The repertoire includes simple songs and harmonies or unison singing, rather than the complex, eight-part harmony incorporated into typical choral arrangements. The first time they hear one another is during the performance during which they also sing through masks.

The two choirs with 60 students he has this semester have done two pop-up concerts in September and October. On two dates in December, the choirs will record their winter concert to be livestreamed to loved ones and area senior centers. 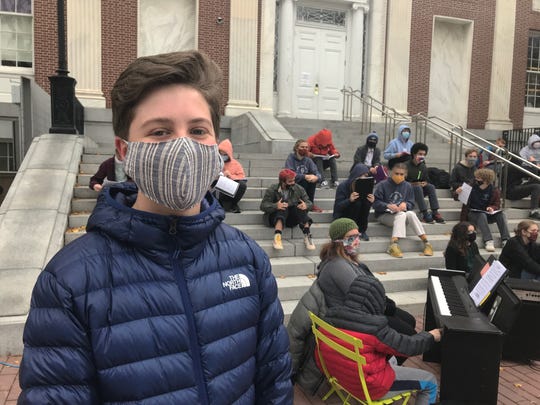 Daniel Gibson, a sophomore at Burlington High School, dons a mask before joining a rehearsal of the school’s choir on the western steps of Burlington City Hall on Oct. 28, 2020. (Photo: JOEL BANNER BAIRD/FREE PRESS)

At the October concert in front of City Hall, tenor Daniel Gibson said mask wearing does make it a little harder to breathe at first, but overall has increased his volume. “It’s definitely harder to project. You need to be louder,” he said. “Sometimes it gets in your mouth when you’re singing. But overall, it’s pretty much the same.”

Another key component to remote choir is assessing singers’ development and performance, not just to evaluate progress but also to ensure vocal straining isn’t occurring for those whose voices are changing and might be singing the wrong voice part. Poli asks for a 45-second audio clip emailed at least once a week.

All that assessing and providing feedback, plus his sheet music delivery service to 60 students’ homes which he calls Poli Prime, takes a considerable amount of time, often 10 hours a day.

Vermont music educators have been sharing their successes through Facebook and other forums, and from what Poli has seen, they are thinking out of the box — working on composition, recording, utilizing new technologies — all “willing to do whatever needs to be done to get these kids through this year,” he said. 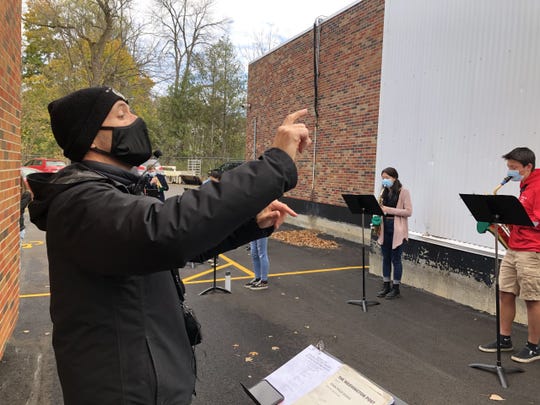 Eric Bushey conducts advanced wind ensemble musicians in the Bellows Free Academy – St. Albans parking lot on Oct. 27, 2020. Outdoor rehearsal, plus 6 feet social distancing, face masking and instrument bell covers are all adjustments the group has had to make in order to be able to play during the pandemic this school year. (Photo: COURTESY/ARMAND MESSIER)

Players and instruments get masked

For Eric Bushey, director of instrumental music at Bellows Free Academy in St. Albans, he’s still amazed he gets paid to do what he loves. This year, though, each buck is well earned.

“I have never been so busy,” he said.

Like Poli, Bushey said music educators are assessing more than ever, providing feedback to video or audio submissions from every student.

The 4×4 schedule (four courses taken each semester) that many high schools have adopted during the pandemic makes it difficult to squeeze in a year’s worth of instruction into a semester, and the alternating hybrid schedule cuts the groups in half.

Bushey accommodates both remote and in-person ensemble members by giving instructions to both groups at the same time. Afterward, the in-person players rehearse together while the remote students have the rest of the period to practice their instrument at home alone.

Members in the string orchestra are allowed to play indoors, masked and socially distanced; however, the wind ensemble, because of its ability to spread respiratory droplets, has been relegated to outdoor playing.

In addition to dealing with the elements, players must mask up, sometimes playing their instrument through a slit in their face mask. Even the instruments get a mask in the form of bell covers. For woodwinds like clarinets, Bushey recommends a cheap, plastic one for outdoor playing and leaving the good one for home practice. 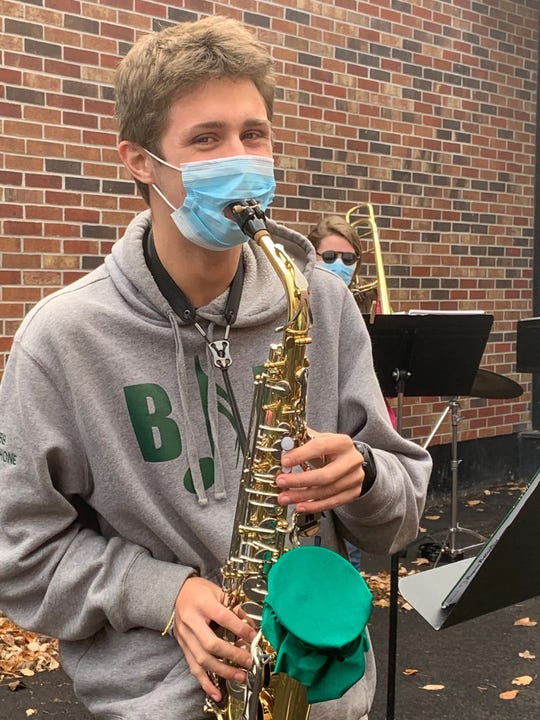 Nathaniel Cobb seems happy to be playing his saxophone Oct. 27, 2020 even given enhanced safety precautions he must take. The Bellows Free Academy – St. Albans student wears a surgical mask with a slit in it and a bell cover on his instrument in order to capture respiratory droplets that could spread through the air. He also performs 6 feet away from other ensemble members and outdoors to limit the spread of potential pathogens during the COVID-19 pandemic. (Photo: COURTESY/ARMAND MESSIER)

When it gets too cold to go outside, Bushey plans to teach guitar to his wind instrumentalists on in-person days because the mouth isn’t involved in guitar playing.

Bushey has embraced technology during these times. Cloud-based technology allows players to add and record their part in a digital audio workstation. And, he has incorporated composition content through online music notation software.

A video performance using individual video submissions and shots from rehearsal days is in the works. Bushey said the students appreciate the edited projects they can go back and watch many times over. Without the pandemic, Bushey says he never would have found the time to make these pieces, and now he can’t imagine not making them. 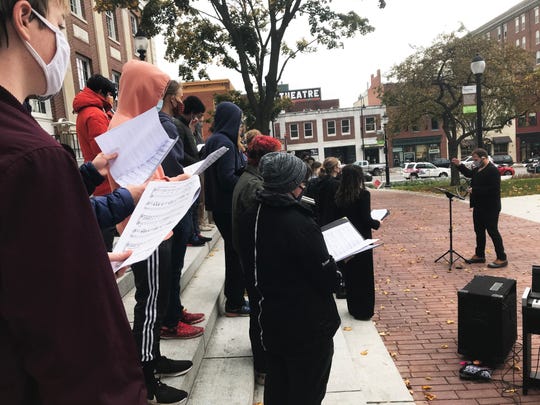 Music educators across the state have expressed concern they have not had stakeholders at the table when school guidelines were created and believe music education was an afterthought. Sports, for instance, got pages of guidelines and had representation in the guidance committee.

The several sentences in the guidelines that apply to music education were updated in late October (with an implementation date of Nov. 16) and suggest that students not sing or play wind instruments indoors. The guidelines allow masked musicians to practice in an unoccupied room that must be vacated for 20 minutes before anyone new enters.

The few sentences in the guidelines contain errors — suggesting “woodwind” instruments not be played indoors, leaving out brass instruments, which are also part of the wind family and can spread droplets. Also, instrumentalists are referred to as “musicians,” which is commonly seen in the music world as a snub to singers.

Bushey said “we got two incredibly inaccurate, error-ridden sentences saying you can put a kid in a class by themselves for 20 minutes. That’s not music education.”

He said the inaccuracies are the result of “not involving practitioners in the process.”

He also said the respiratory droplet studies which influenced the state’s guidelines were conducted in the summer, but there are new studies that show playing and singing to be safer than originally thought, to the point that many music programs across the country have gone indoors without associated outbreaks.

The Vermont Agency of Education is sympathetic to music educators’ concerns, said spokesman Ted Fisher in an email.

Fisher said the agency reviewed newer research and did not find it conclusive enough to allow music activities to resume indoors.

“Unfortunately, the best available research still demonstrates that there are significant risks associated with many of these activities,” Fisher said.

The Vermont Music Educators Association has tried to get a seat at the table, and while they weren’t on the guidance committee, they did submit suggestions to the agency. Fisher said what they received from stakeholder groups did not meet the high health standards needed.

Fisher said they do plan to release more music education guidance and are meeting with educators the first week of November for that project. He also said they continue to evaluate new research and will modify their position and guidance accordingly. 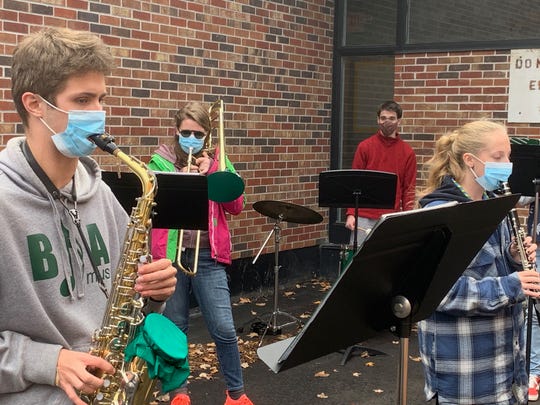 The impact the pandemic is having on young musicians provides challenges that could have long-felt repercussions.

Bushey says that while those who are involved are getting a lot out of it and are dedicated, those in younger programs, particularly at the middle school level, aren’t getting the same level of exposure.

Bushey and Poli see high school students reinvigorated by even small opportunities to make music and connect with one another. It’s slower, different, and maybe not as complex, but it’s been an important form of expression that lifts the students’ spirits in palpable ways.

But, some middle school programs may meet only once a week on Zoom and Bushey foresees a drop in numbers at the early levels.

He said “you have the state’s most creative minds” in artists and music teachers. He hopes the Agency of Education and communities will tap into these valuable resources to help bring everyone through difficult, changeable times.