The Big Ten’s later start to the college football season has been compared to a golf tournament in which most of the field has already completed 36 holes. A more apt analogy might be that of a poker tournament with some new tables starting up. A lot of players have seen a bunch of hands and chipped up, but the newcomers still get a starting stack with, presumably, the opportunity to reach the final table.

Some contenders have already figuratively snared pocket aces in their first hand and will jump right into the mix, while others will enter with the dreaded 7-2 off-suit and desperately hope to catch a miracle flop.

Of course the action continues at the other tables – er – conferences as well. The SEC picture isn’t likely to change; Alabama is a heavy favorite at Tennessee and most other contenders have the week off.

So we’ll highlight the other power leagues in this week’s rundown of the five games most likely to impact the playoff race.

Nebraska at No. 5 Ohio State

The Buckeyes, projected by nearly everyone as the league’s top College Football Playoff candidate, begins its quest at home against the Cornhuskers, another program whose supporters were vocal about wanting to make the season happen. 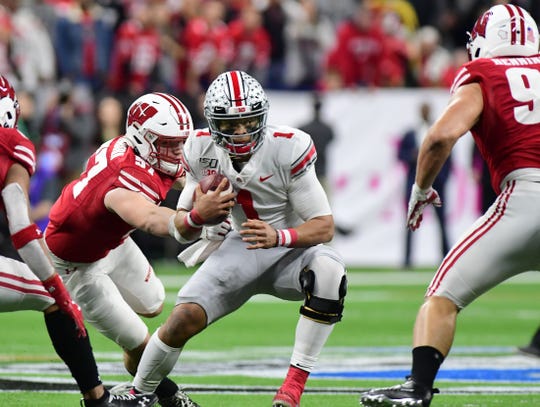 Ohio State QB Justin Fields, a Heisman favorite prior to the season, now has some catching up to do as voters have gotten a look at other contenders for nearly two months. He’ll be more concerned with winning than with his own stats, of course, but Buckeyes’ fans will be just as eager to see his performance. He should get plenty of ground support from RBs Trey Sermon and Master Teague, though the latter might be eased into the rotation as he works his way back from an Achilles injury he sustained in the spring. DE Ben Stille is one of the few veterans on the Cornhuskers’ defense that will have its hands full. The Nebraska offense will counter with QB Adrian Martinez, a third-year starter with a ton of athletic ability but not as much surrounding talent. His protectors have experience, but his receivers for the most part do not. Buckeyes LBs Tuf Borland and Baron Browning figure to be busy as new starters on the front line find their footing.

This prime-time tilt is the best matchup on the Big Ten’s opening-day slate. The Golden Gophers and Wolverines are in opposite divisions, but neither can afford a loss with so many difficult matchups ahead. And of course, the Little Brown Jug is on the line.

Michigan fans will get their first look at sophomore QB Joe Milton, a big guy with a big arm. Having RB Zach Charbonnet back in his backfield should ease his transition. LB Mariano Sori-Marin will lead the Gophers’ defense that will be breaking in a lot of new parts. Minnesota fans are just as excited about incumbent QB Tanner Morgan, coming off a breakout 3,000-yard sophomore campaign. He’ll be helped immensely by NFL-caliber WR Rashod Bateman’s decision to opt back in, but DE Aidan Hutchinson and the Wolverines’ D-line could make his job difficult.

Over in the Big 12, two of the three remaining teams still unscathed in league play square off in the week’s key clash. The Cowboys must protect their home turf to preserve any playoff aspirations, but the Cyclones have designs on the conference crown themselves.

Both teams had last week off, although only Iowa State’s bye was scheduled. Oklahoma State had its date at Baylor postponed and must now shift gears to prepare for the Cyclones’ more accomplished aerial attack directed by QB Brock Purdy. The additional time off could allow the Cowboys to regain the services of QB Spencer Sanders, who has been out since the season opener with an ankle injury but is back in practice. Both Sanders and freshman Shane Illingworth could see action, so LB Mike Rose and the ISU defense will be prepared for either. Cyclones TE Charlie Kolar, an Oklahoma native, is one of Purdy’s top weapons who will merit extra attention from Cowboys DB Tre Sterling.

No. 3 Notre Dame at Pittsburgh

With top-ranked Clemson unlikely to be pushed by Syracuse, the attention in the ACC turns to the Tigers’ pursuers. The Fighting Irish will get a crack at Clemson in a couple of weeks, but first they must get past this potential roadblock. The Panthers are on a three-game skid but have a recent history of tripping up ranked opponents.

Pitt QB Kenny Pickett (ankle) didn’t make the trip to Miami last week and still might not be ready to return. Freshman Joey Yellen wasn’t bad in his stead, throwing for one score and no picks, but LB Jeremiah Owusu-Koramoah  and the Notre Dame defense can be quite stingy, particularly on third down. It is the lack of punch from the passing game that has Notre Dame fans most concerned. QB Ian Book has been helped by consistent production from RB Kyren Williams, but DB Paris Ford and the Pitt secondary will be ready to take away the ground game if Book can’t open things up.

The Tar Heels’ unexpected setback at struggling Florida State dealt a severe blow to their bid to reach the ACC championship game. The Wolfpack would love to add to their archrival’s troubles, though North Carolina State has issues of its own.

Wolfpack QB Devin Leary had his promising season derailed by a leg injury in last week’s win against Duke. The good news is Bailey Hockman has had success taking meaningful snaps this season, though he’ll have to take care of the ball. DB Don Chapman will lead the Tar Heels’ effort to minimize big gainers. UNC QB Sam Howell nearly led the Heels all the way back from a 31-7 deficit in Tallahassee but was thwarted late by some costly drops from his receivers. RBs Michael Carter and Javonte Williams will test the somewhat leaky Wolfpack ground defense, though N.C. State LB Payton Wilson must be accounted for at all times.